Serve Some of the World's Most Vulnerable Children

On January 12, 2010 a magnitude 7.0 earthquake struck Haiti, killing more than 250,000 people and displacing more than a million. In October 2016, Hurricane Matthew devastated this already-fragile country, killing 500 people, displacing 175,000, and increasing the ever-present needs of this impoverished nation.

Forward Edge teams to Haiti get to serve some of the most vulnerable children and families hit hardest by Hurricane Matthew in a small community called Vernet. Vernet is located just outside the city of Les Cayes in the southern region of Haiti. The devastation of Hurricane Matthew has made survival increasingly difficult for the 3,000 people who live here, and out of desperation, many parents have turned to the practice of restavek, giving their children away in a form of domestic slavery.

Forward Edge teams to Vernet will support Pastor Prenor Coudo and his wife Antonise who lead a community-based ministry for vulnerable children they call “Kids Club.” On a weekly basis, they touch the lives of over 100 children—some from restavek homes—with the Gospel, a healthy meal and other activities to give them hope. Teams will have the opportunity to come alongside this critical ministry to serve the children and their families, making a lasting impact on their lives.

Djenika shares her personal story of what it’s like to live as a domestic child slave, or restavek, an all-too-common practice in Haiti. 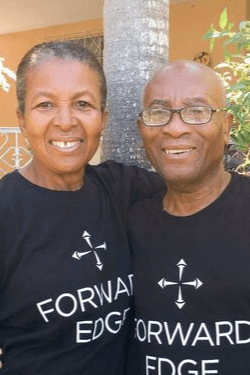 Jean Chavannes Jeune is a pastor, evangelist, and missionary widely known and respected in the nation of Haiti. Over the past 38 years, Pastor Chavannes has participated in the creation, administration, and functioning of many organizations and institutions in Haiti geared for social and economic development.

Pastor Chavannes has also participated in the development and promotion of many national and international religious and missionary institutions in Haiti, including the Bible Lumiere Institute, the Extension of Radio Lumiere Network via the Internet, the Worldwide Missionary Vision Organization, and the Protestantism Global Vision Organization in the Haitian Milieu.

Pastor Chavannes is married to Marie Lucie Carisma, a business administration specialist. They have four grown children, three sons and a daughter.

We are blessed by Pastor Chavannes’ heart for the country of Haiti, his desire and commitment to serve his community, and his passion to further God’s kingdom. We believe his extensive managerial and leadership experience will be a crucial part of our long-term success in Haiti.

Sheri's Forward Edge experience began in 2000 when her ordinary family got a last-minute call that a missions organization needed help the following day for a weekend conference whose scheduled worship leader was unable to attend. Her family of five thought they were saying yes to a weekend, but God had additional plans. Just a few months later, David, Sheri's husband, took leave from his job for a three-week Forward Edge trip serving Kosovar widows alongside Albanian missionaries. From that point forward, broken for the broken-hearted and motivated by God through the humble servants at Forward Edge, David and Sheri began facilitating teams to different Forward Edge locations when they could. There were long dry periods of time that felt very ordinary — it seemed God was leading them to just be faithful in their ordinary lives — in the marketplace. And then there were times when God was asking for a little more. In 2005, they, along with their three kids, resigned from their jobs and ordinary lives and moved to Tiranë, Albania for a one-year assignment to serve and love this previously atheistic country and her people.

Back in the states, life continued ordinarily as they resumed day jobs (Sheri an engineer, David a surgical technologist), finished raising their kids, and facilitated Forward Edge teams. Since 2007 Sheri has worked in a local school district, most recently managing capital construction — building new schools and renovating existing ones. She is overjoyed to now be serving alongside the staff at headquarters, building for eternity instead!

Sheri is passionate to see the glory of God in people as they walk in freedom and confidence in who they were created to be, understanding His immense love for them. She is continually overwhelmed by His demonstration of His glory through the beauty of creation, whether watching the sunrise on the drive to work, kayaking with her husband on a Pacific Northwest lake, or hiking and camping in the mountains with their married kids.

What drew you to the mission of Forward Edge?

The fact that God uses ordinary people to serve him with whatever they have!

If you could have dinner with any person in history (except Jesus) who would it be and why?

I would have dinner with my grandpa who died before I fully understood the power of prayer. A farmer and rural college maintenance man, tennis champ, and traveling worship leader himself (he played the saw!), I've heard stories all my life of his dedication to prayer for his family — I'd like to thank him and continue to learn from him.

What is something about you others are often surprised to learn?

People are usually surprised that I'm an engineer and got to work in San Diego right next to the ship where the Navy dolphins trained.

Hi! I’m Sheri, the Haiti Team Coordinator. I look forward to working with you to plan your life-changing week in Haiti!

If you’re interested in organizing a team of 10 or more, you can contact us by filling out the short form below. If you’re an individual looking to join a team, you can scroll through our list of open teams here.

Contact us today to start planning your mission team to Haiti!