Neighbors Near And Far: When you should or shouldn’t give to international missions

Why give to International Missions when there are people in need in our own backyard?

This is a legitimate question. Sometimes conflicting feelings can arise about where our money “should” go. After all, most of us are familiar with the old adage that “charity begins at home.” There are many diverse opinions when it comes to charitable giving, but when help comes from the heart, there is no one cause less important than another.

To discover the answer to this important question, here are a few questions to consider:

1. What does the Bible have to say?

The Bible has set the precedent for helping those in need. All throughout the Scriptures the practice of giving and serving is demonstrated and actually commanded of the people of God. Moses instructed the children of Israel on providing for their fellow countrymen in need, as well as foreigners in their land. The apostle Paul set a perfect example of not only serving the poor in local communities but throughout regions of the ancient Middle East, as he consistently took up collections from a church in one area to aid a church in another.

Jesus brought this concept home best in His well-known parable about the Good Samaritan in the book of Luke, Chapter 10. One day while teaching, Jesus is asked by a man about how to inherit eternal life; part of Jesus’s reply is to love his neighbor as himself, to which the man replies, “And, who is my neighbor?” Jesus proceeds to tell a story of a Jew who was attacked on the road, robbed and left for dead. Three separate people come upon him lying there, two Israelis and a man from Samaria, but only one of them stops to help—the Samaritan, a despised foreigner by the Jews. Jesus made it clear that our “neighbor” isn’t necessarily someone we know or would consider a friend, someone from our hometown, or even someone from our own country.

Is poverty the same everywhere? Does it mean something different to be poor in a developing country versus a developed one?

The World Bank defines extreme poverty as living on less than $1.90 USD a day, and many families in other countries exist on far less. Living in poverty in the U.S. is defined, per person, as existing on or below $12,486 USD per year ($34.21 per day), and less than one in ten people meet that criterion. This isn’t to say that poverty in developed countries isn’t legitimate and real; each situation needs to be evaluated individually within its own context.

There are a few pertinent differences to consider, however. Countries in the developed world generally have more governmental resources, infrastructure, and services available to assist their people than those of the developing world. Children in developing countries are much more likely to die of malnutrition or easily preventable and treatable illnesses than those in developed countries.

Breaking the cycle of poverty in developing countries is also more difficult. All of Forward Edge’s ministries identify education as being one of the top three priorities for the children of their communities; they recognize that getting an education is a key component in escaping an impoverished mentality and lifestyle. For governments who do not provide schooling, tuition expenses are exorbitant for families living in poverty. For those that do, very often the costs for required uniforms, books and supplies are prohibitive for parents who barely earn enough to provide the essentials for their families. In both cases, too many children, ultimately, remain uneducated and the cycle continues.

It’s also important to remember that money from developed countries usually has a more far-reaching effect in an undeveloped country than it does at home. The cost for food, clean water, medicine, and even tuition in an undeveloped country would often be very affordable to those living in a more developed environment and economy. In some countries, $40.00 USD is equivalent to a full month’s wage. To put this into perspective, what we might spend on a nice meal out could provide a month or more of living expenses for those less fortunate.

3. What do you feel called to?

Jesus reminds us of the scope of this poverty crisis in the world when He says in Matt. 26:11a, “the poor you will always have with you…” The needs in this world are many, and we can’t respond to all of them but God has given each one of us the ability and the charge to make a difference where we can.

One of the verses that Forward Edge was founded on is Ephesians 2:10: “For we are His workmanship, created in Christ Jesus for good works, which God prepared beforehand so that we would walk in them.”

What is it that you are passionate about? What stirs your heart and motivates you to want to act? That image that comes to mind was put inside you by the Creator of your soul and makes you unique.

We’re each given different callings and equipped with different gifts and abilities. Perhaps your cause is right in your own community, your state, or even nationwide—that’s fantastic. It could be that you’re drawn to serve and minister to those in need in foreign lands—wonderful. Maybe you’ve got more than one cause that you’re passionate about and wondering how to contribute to each. While our time and resources aren’t endless, there are ways to accomplish this. You might choose to give financially to an international ministry or sponsor a child in another country, and at the same time volunteer at your church, or devote a day a week to serving in a local ministry in your community.

If you don’t know yet what the good works are that God has prepared for you, pray and ask Him to reveal His plan for you. It’s never a question of if we should help, but who we should help.

The problem of need is immense and it’s easy to feel like our small contribution is just a drop in a vast ocean. Whenever I start to think this way I am reminded of the story about the hundreds of starfish stranded on the beach at low tide. One caring person began going one by one and tossing them back into the surf. The person was challenged by an onlooker who observed that there was no way he’d get all of the starfish back in the water before they died, so what difference would it make to continue; his reply as he tossed one back in was, “it made a difference to that one”.

Is God calling you to live your mission with Forward Edge?

One of the most impactful things I learned as a teenager was that God will do extraordinary things through you whether you are 5 or 45, 15 or 52; He has no age restrictions and certainly does not follow the boundaries that we build up ourselves. Even now, at 21,

We are so excited to be starting 2019 off with the addition of a brand new Forward Edge ministry location. Our newest Child Sponsorship program, Light A Candle, serves 400 children in some of the most difficult areas of Kampala, Uganda. Kampala comprises 3.5 million people within the city limits,

A Recipe for Transformation

When I introduce new people to Forward Edge, I’ll often describe what we do this way: we help children around the world overcome poverty, discover their true worth, and pursue God’s extraordinary purpose for their lives.  I believe these three descriptors are distinct and important. Let me explain a little

Letters are vital to raising support for your mission trip. If you have to choose between letters and events, choose letters. Here’s why: They work. People love to see others serve, and they will respond. Even if they might not go themselves, they can be a part of your experience. 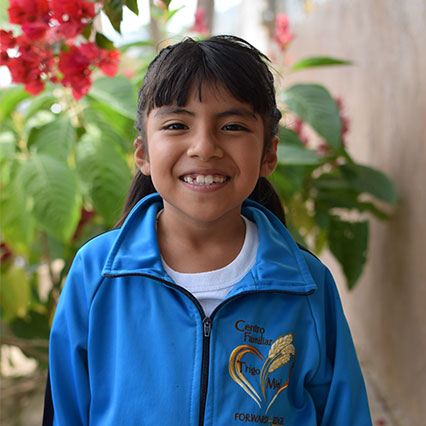 Dulce lives with her mother and 3 siblings in a concrete block house on a piece of land that was inherited by her mother from her grandparents. In order to build the house, Dulce’s father had to take masonry work away from the community to earn enough money. He has been away from the family working for a year. Dulce’s mother stays home to care for the family.

Dulce’s brothers, Bryant and Jose, are also in the Trigo y Miel program.