Conventional wisdom on wealth has been expressed throughout the ages. Ancient Greek philosopher Democritus wrote, “Happiness resides not in possessions, and not in gold, but rather dwells in the soul. By desiring little, a poor man makes himself rich.” Founding Father, Benjamin Franklin stated, “He does not possess wealth that allows it to possess him. Who is rich? He that rejoices in his portion.” Nineteenth century Lebanese poet Kahlil Gibran penned, “Money is like love; it kills slowly and painfully the one who withholds it, and enlivens the other who turns it on his fellow man.” And contemporary songwriters, Lennon

“Consider this: Whoever sows sparingly will also reap sparingly, and whoever sows generously will also reap generously. Each of you should give what you have decided in your heart to give, not reluctantly or under compulsion, for God loves a cheerful giver. And God is able to bless you abundantly, so that in all things at all times, having all that you need, you will abound in every good work. As it is written: ‘They have freely scattered their gifts to the poor; their righteousness endures forever.’ Now he who supplies seed to the sower and bread for food will

Growing Through Trials in 5 Practical Ways

Though generally joy-filled, one of the difficult aspects of the Christian life are the troubles we encounter in the midst of following and trusting God. Jesus and the apostles tell us in God’s Word that this will be a common experience for us, and it raises the question of how we deal with such hardships when they arise. Recently, this truth hit very close to home for us at Forward Edge. Our program, Villa Esperanza, in Managua, Nicaragua has been deeply impacted by the current political and social unrest and violence in the country. Not only has the financial and

What is Child Advocacy and how do I do it? “Child Advocacy”… such an official sounding term, isn’t it? Miriam Webster defines advocacy as “the act or process of supporting a cause or proposal”, and when broken down that way, it’s a pretty simple concept. Many of us are child advocates in our daily lives and perhaps not even aware of it. If you’re a parent who is involved in supporting or promoting your child’s education or extra-curricular activities, that is advocacy. If you teach Sunday school or help in your church’s nursery, that is advocacy. If you contribute financially

Neighbors Near And Far: When you should or shouldn’t give to international missions

Why give to International Missions when there are people in need in our own backyard? This is a legitimate question. Sometimes conflicting feelings can arise about where our money “should” go. After all, most of us are familiar with the old adage that “charity begins at home.” There are many diverse opinions when it comes to charitable giving, but when help comes from the heart, there is no one cause less important than another.   To discover the answer to this important question, here are a few questions to consider: 1. What does the Bible have to say? The Bible has

Many of us have seen profile photos of children in sponsorship programs; they are often solemn, sad and sometimes down-right angry looking. I know I have thought at times, “Wow, that poor child must be so unhappy!” But then I come across a video from the same organization in which the children are playing and laughing, and I scratch my head wondering what the difference is. I recently had the opportunity to visit our children’s sponsorship program in Vernet, Haiti. In advance of the trip, one of the tasks I was preparing to tackle was taking updated photos of the

Continuing Your Mission Back Home

I’m home from a life-changing mission trip. Now what? A short-term mission trip is an intense experience, in more ways than one. In the space of a week to 10 days, you’re immersed with a new group of people, develop a routine and learn new tasks and skills. You’ve also been thrown into (and pulled out of) a culture that may have been completely different from your own. Along with these practical changes, you’ve also probably experienced a range of emotions, from frustration to encouragement, to heart-wrenching realizations and encounters with God. Your values and assumptions about life may even

4 Tips to Grow Closer to Your Sponsored Child

As a child sponsor for over 3 decades, and now as the Child Sponsorship Administrator for Forward Edge, I am often asked (and challenged myself) about how to best communicate with a sponsored child. In almost all cases, the children we sponsor live in other countries. We do live in a technologically advanced age with a myriad of electronic options and apps designed for communication, but for logistical reasons (and safety precautions) these methods are rarely viable or suitable for sponsor/child contact. Ultimately, the best way to communicate with our kids is through good old-fashioned letters (and e-mail, thank goodness).

Presenting Your Mission in 5 Steps

When it comes to sharing with others about your mission, calling, or passion for a particular cause, your main objective should be to connect with your audience. Get them engaged emotionally and intellectually so that they are ready to receive what you have to say. Whether you are one-on-one or speaking to a group, considering in advance how best to accomplish this goal is important for a successful presentation. Here are some points to keep in mind: 1. Be Authentic This is probably the single most important element in relating to others. People will hear your heart before they hear

Three Team Members, a piece of cake, and Miss Bonnie It had been three days, and none of us had met Miss Bonnie. “We could see this small shed on the property as we were working, but weren’t sure if someone was actually in there. And then we heard that Miss Bonnie had gone through an entire night sleeping in that shed, without electricity or heat…on a night when it was below freezing.” That’s when the three youngest members of the Houston team from New York decided to pay Miss Bonnie a visit. A Fateful Trip to Houston Even before

10 Ideas for Choosing a Child to Sponsor

Choosing to sponsor a child is a big leap of faith. Once you have taken the first step of saying “yes” to sponsorship and helping vulnerable children, the next step can be joyful…and overwhelming! It can be difficult to know where to start that’s why we’ve put together a list of 10 ideas to help you choose. 1. Decide based on how long they’ve waited Choose a child based on how long they’ve been waiting for a sponsor. Anyone who has longed for something knows this proverb to be true: hope deferred makes the heart sick. Many of the children

4 Tips for Taking Photos on the Mission Field

The Forward Edge Blog In many ways, photography can be a vivid part of your ministry on the mission field. It can be used to break down cultural walls, build relationships, display respect, support team members, and share important aspects of a ministry with the outside world. Here are four tips for making sure your photography benefits your mission trip. Share Your Pictures Taking photos on a mission trip can be a great opportunity to bond with those you are serving. You don’t need to speak the same language to enjoy taking and looking at pictures together. Sharing pictures with those you are

Imagine a child, seven years old, living in a garbage dump and watching both her mother and father die slowly of AIDS-related illnesses. This was reality for Erminia before she joined Forward Edge’s program for at-risk girls in Nicaragua called Villa Esperanza (Hope Village). If Erminia had continued to grow up living in the dump, she likely would have had a teenage pregnancy (one in four girls do in Nicaragua). That could have happened through rape, a drug-induced mistake, or even forced prostitution—all things not uncommon among girls living in the dump. One thing is almost certain: if Erminia had

Fundraising Tips for Your Mission Trip

Forward Edge International has sent over 1,500 mission teams over the past three decades. During that time, we’ve gathered a few tips common among those who’ve successfully raised funds for their trip. Fundraising not only helps support your trip financially, it also provides a way for your friends and family to share in your service (and impact!) as well. Here are some of the tips we’ve gathered over the years: Focus only on one or two fundraising strategies or events and do them well. Sending a support letter is often most effective. Here you can find some tips and tricks

Letters are vital to raising support for your mission trip. If you have to choose between letters and events, choose letters. Here’s why: They work. People love to see others serve, and they will respond. Even if they might not go themselves, they can be a part of your experience. Send it to Christians and non-Christians alike. Share WHY this cause is important to you – WHY you want to go on this trip. It’s not just about money. It’s about prayer support. This is absolutely necessary. Any trip that has a spiritual component will have spiritual opposition and requires

Many teens from our program in Mexico recently had 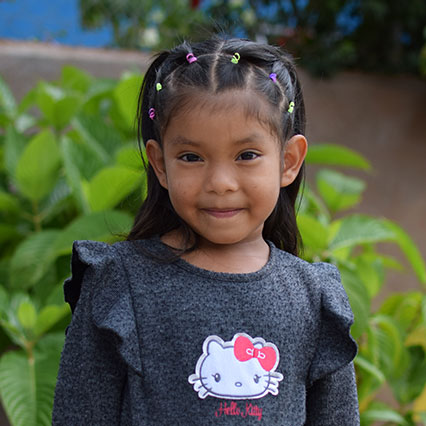 Fernanda lives with her parents and big sister on her grandparents’ property. The family sleeps in a one-room sheet metal structure apart from the main dwelling, and share the bathroom and kitchen. Fernanda´s mom, Edith, attended Trigo y Miel as a child and has now returned to have her daughters attend. Her father is steadily employed but earns a low salary due to not finishing his education.